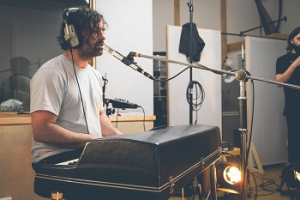 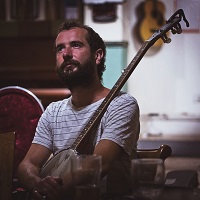 Based in Wrexham raised in Flintshire North Wales Andy Hickie has been on the folk and acoustic scene for some time now, firmly establishing himself on the troubadour circuit across the UK and Ireland. With his harmonica and guitar, Andy currently sings renditions of traditional Welsh language and Irish folk songs with passion for reviving and preserving tradition. Influences include Bob Dylan and Luke Kelly of the Dubliners. Andy hosts regular 'Gathering of Folk' events bringing a sense of community, celebration and a good old pub sing-a-long.

Andy is due to release his 'Folk EP Vol 1' on Hound Sound Records' this Summer. Followed by a string of shows including headlining the folk stage 'Ty Gwerin' at The National Eisteddfod 2022.

“Authenticity and integrity. An enlightened performer."

Yasmine Latkowski is a songwriter and composer specialising in Middle Eastern and Eastern European music. Her work can be heard in various TV programmes including Channel 4's Come Dine With Me and BBC2 Art of Persia. As an established performer, Yasmine has previously performed as a singer and dancer in an Arabic influenced band called Taqsim, based in North London. This enabled Yasmine to forge ongoing connections in the World Music Scene. She has recorded a number of well-established musicians for her compositions including Tim Garside, Sass Hoory and klezmer band She-Koyokh. Since relocating to Wrexham Yasmine is currently performing with John Ramm, including Middle Eastern and Balkan folk songs, original compositions and incorporating live bellydancing! Her main goal is to bring music and dance together and bring Middle Eastern music and dance to a wider audience.

Tom Emlyn writes honest, swirling folk songs that cut straight to the bone. Known for his work with rock bands

News From Nowhere and Bandicoot, his solo work maps an alternative Southwalian landscape drawn from psychogeography and local history.

It's a rich descriptive portrait of the unique post-industrial character of Swansea.

Written on foot and by bus, his observational, poetic lyrics and simple 60s-folk influenced melodies explore what it means to belong to a place; the bitterness, the love and the humour.

In the particular is contained the universal, and Tom Emlyn's captivating songs explore the particularity and peculiarity of human experience in a unique way.

Wrexham-based duo Igloo Hearts are made up of Welsh, married couple, James and Katie MacGregor. Their music incorporates classical piano and powerful harmonies, in a style that is hauntingly beautiful.

Igloo Hearts have been featured several times on BBC introducing Wales. Adam Waltons’ (BBC Radio Wales) response to their single (FishFood) was ‘Oh My God, that’s really, really good!!’ and ‘There is something quite ‘McCartney – esque’ about the melody’.

Indie Music For All wrote ‘I am astounded by the talent of this couple. They are a combination vocally, of the best bits of Kate Bush and Enya. A bigger compliment I couldn’t give them.’

Igloo Hearts have played at many stunning venues around North Wales, Cheshire, Shropshire and the North West, including a recent session at St Giles Parish Church, as part of Focus Wales International Festival 2022 supporting Kizzy Crawford.

Their recent achievements include being selected for the recent Focus Wales 2021 ‘Songwriting Bootcamp’, and being chosen as finalists for the Liverpool Acoustic Songwriting Competition 2022. Igloo Hearts have also been shortlisted for the Purbeck Rising 2022 competition as part of the Purbeck Valley Folk festival 2022.

Their passion is interesting and unexpected songwriting, that keeps the listener guessing and engaged, with chord experimentation and power harmonies. 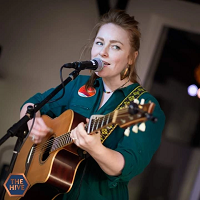 The solo moniker of British singer-songwriter and producer Jo Dudderidge. His distinctive voice, soulful piano and lyrical wit take centre stage within songs and arrangements that have drawn favourable comparisons to Rufus Wainwright, Ezra Furman and The Bees.